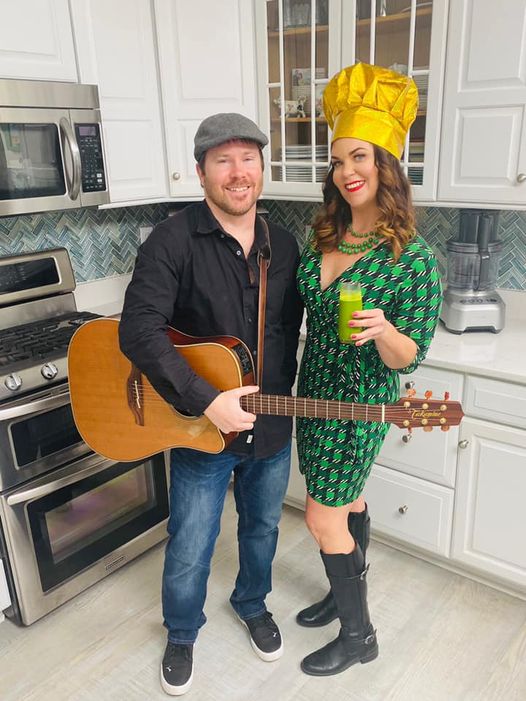 Courtney: Hi, I’m Courtney UnCooked here with Rob Oliver. And today we’re going to show you how to make a delicious green juice for St. Patty’s day or every day. It is super delicious and nutritious. And at the end of the show, Rob’s going to play his hit single believe, so stay tuned.

Theme Song:  Courtney…Courtney UnCooked. I’m Courtney Uncooked cause that’s how I like my food. The vitamins and the minerals, you know they all get through. Absorbed into the body so that nothing gets lost when you start eating raw, of your health, you’ll be the boss. Raw vegan for my health and you know that health is wealth. To help you stay your best, we will welcome special guests. So let’s go make a recipe and have lots of fun, your healthy living journey has just begun cause I’m Courtney…Courtney UnCooked.

Courtney: Hi, happy Saint Patrick’s Day, happy March. I’m Courtney UnCooked here with my friend and musician, Rob Oliver. And today, we’re going to show you how to make an amazingly delicious and nutritious lemon ginger blast. I got the recipe from my friend AJ. It’s amazing, it’s good for you. So, I can’t wait to show this to you, Rob, have you ever had green juice before?

Rob:  You know, I’ve never, I’ve never had it directly, farm to table like this.

Rob: I’ve had it from a convenience store.

Courtney: Okay, Okay. You got that gas station juice?

Courtney: So, you’re like no Big Bite stay away. I’m going for the juice. Well, you know what? Gas station juice Rob is better than a Big Bite so, good job. Good job, buddy. Well, today I’m going to show you how to make delicious green juice yourself. And it’s kind of, the jokes on Rob today because I asked you, what do you want to make when you come on the show? And he said I love dessert. I want to make something sweet and we’re making green juice, but I just felt like we should, because it’s, you know, March, it’s the month of green. It’s St. Patrick’s Day. Also, it’s winter, and it’s cold, and a lot of people are sick. And so, we really need to build, build and boost our immunity. And so, I know I’ll show you something sweet later, but today we got to go for this lemon ginger blast.

Rob: I’m excited. This is great.

And AJ thought well, what do I have to lose? Let me try it. And within a week he never went to the hospital again, that was two years ago. Today, he’s super healthy, he’s crazy, he does ice baths, he fills his tub up with ice every week, and does an ice bath. He lives where it’s really cold, he’s always rolling around in the snow, because cold actually boosts your immune system too, so he has done a complete 180 from lying in a hospital bed to laying in a bathtub full of ice and drinking green juice. So, this kid is such an inspiration, AJ Dybka and he also does health coaching.

You should look him up, on Instagram and Facebook because he’s amazing. So, we’re going to get started, Rob’s never juiced before, so that’s great. You don’t have any bad habits to break. You’re going to start off with the best juicer of all time, the Champion Juicer, it is made in America. And it’s very easy to use and very easy to clean. First, we’re putting in the cucumber and the cucumber is part of the melon family, and this is going to cool inflammation in your body. So, the recipe just calls for one large cucumber, and then we’ve got two apples, and then the apples are going to make it taste great and give you that healthy sugar. You always want to make sure that you get rid of the apple seeds because they are toxic. Alright, so now we’re going to do some celery, and celery is going to have natural electrolytes. So, this is going to be your healthy Gatorade every day. This is good sodium, good electrolytes, so we’re going to…

Courtney: Yes, just like us. Yes, yes. But you know what I’m finding? It’s been really hard to buy celery this year. It’s like it’s always out of the stalk. And how do you sneak up on celery, Rob?

Rob: I have no idea.

Courtney: You stalk it. Then we’ve got some cilantro here, and we’re just going to put in a big bunch of cilantro. And this is really important for this juice because it’s going to get rid of heavy metals. You got it, that cilantro’s got nothing on you, Rob.

Rob: Get in there, buddy.

Courtney: Get in there. So, then we’ve got just a piece of turmeric and we’re going to put extra turmeric in, but really you only need a piece for this. And turmeric is really good again, for reducing inflammation, but you got to be careful when using this because it will stain the counters and your hands. There we go, and then next we’re going to put in the ginger and ginger is really good for your digestion and your blood circulation. So, you can see that every ingredient really has a purpose in this. The juice of one lemon, lemon is awesome because it dissolves mucus and again, if you’re sick, you’re probably going to have a mucus build-up. Also, it just helps the drink last longer and tastes good, it tastes delicious.

Rob: This is smelling good.

Courtney: Yep, It’s so good. Alright, we’ll just take our juice out in this lovely container. And what I like to do is strain my juice three times. And I think the easiest way is to just have three strainers. This juice is good for everyone. And I asked AJ, you know, through his health coaching, is there anyone that he wouldn’t recommend this juice to and he said, no, everyone. So, it’s good for everybody. So, we’re just going to pour that right through there. Look at that, I’m just going to pour it back in here from the bowl, but now it’s going to be all nice and strained, beautiful green St. Patrick’s Day or every day, lemon ginger blast from my friend AJ. Alright, what are we cheersing to?

Rob: Some Irish luck or something.

Courtney Singing: Making a lemon ginger blast with Rob Oliver. Don’t forget to strain it three times and give it a stir no, no. I got the recipe from my friend AJ, he says you should drink it every day now. It gets rid of heavy metal when it comes to your health, you should never settle. No, you don’t need a stove or an oven to cook, just a blender, dehydrator, and some Courtney UnCooked.Rob: You, you feel like home to me. When I’m alone, never get scared, because I know you’re near. And my heart is where you belong with me so safe and sound. My worries and doubts all disappear.  Love is the answer to fear. Fear is a question of faith; faith is what you can believe. Believe in yourself and you will find love.

Check out a few of our Partners and Friends

Courtney UnCooked is a source for delicious raw vegan recipes, nutrition, and lifestyle advice. Every week we publish a new recipe video and feature links and more information HERE.